Take the rough with the smooth

As I’ve said before not everything in brewing and business has to be all ‘Look how good this is’ or ‘have you seen this new thing’, on occasion something will slip or not turn out as expected, I’ve not got a problem showing the rough with the smooth because when setting out in business I had one very clear goal… and that was to be Human.
I’m really not a fan of companies being all buttoned down and corporate, things like Trade Associations make my skin crawl (SIBA), so we try our best to be professional even if an occasional stern word or opinion slips out from time to time, its only Human. 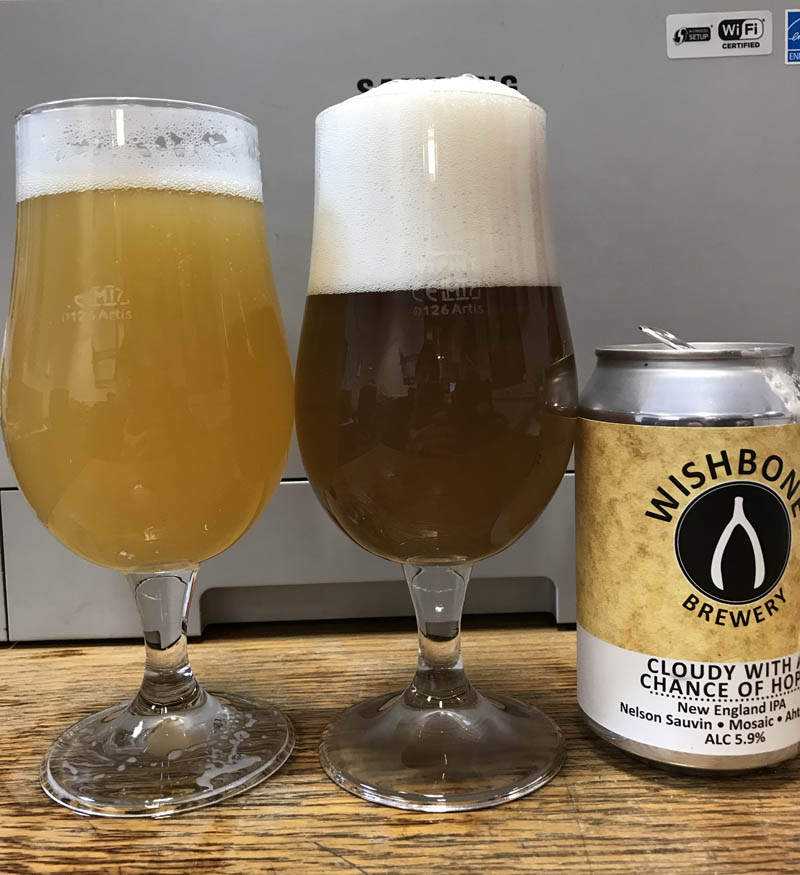 A picture can say a thousand words….

We were immensely pleased with our new canned beers, but on Thursday evening we spotted something on social media with someone drinking one of our freshly delivered cans of ‘Cloudy with a chance of hops’ they stated it was oxidised so the following morning we randomly opened some cans from different boxes and poured a lot of beer. Then as a control we hooked up a keykeg of the same beer from the same tank that was used to Can from, The Glass on the left is the our keg sample and the one on the right is the Can sample you can’t say its not obvious can you!!

We knew our beer was right, we have brewed this recipe many times before for Cask and Keg and it has always beer right.
Our approach to our first Canning day was to have an extra level of Best Practice we wanted our beers to reach the Canning Machine is the best state possible, all the obvious cleaning was done and a cleaned Tank was Purged with Co2 (repeatedly filling and blowing off Carbon Dioxide pressure from tank) this is to reduce or remove the presence of Oxygen so that it cannot affect the beer we would put in it for canning. Co2 pressure was also used to supply the beer to the Canning Machine.

We used the most recommended canning company we knew of, they were very professional on the day and after a days work we had Dassler (already pre-carbonated in tank), Zoikes and Cloudy (to be Can-Conditioned) in Can, we were happy.

The Dassler was ready about 24 hours later when the yeast had settled in can, the Zoikes and Cloudy were tasting great within a week in our warm-room, and we sent deliveries out this week to some great bottle shops. *Spotted the Social media thing as mentioned above* then spent a very stressful Friday writing emails and contacting the customers who had bought cans of Cloudy to get them to withdraw from sale to minimise any damage they would cause. There was variability in the cans we opened and tested so there probably will be some good ones in among the bad ones, even last Saturday the beer was being drunk in our brewery bar and getting good feedback so its all very frustrating.

We believe that Dassler & Zoikes are unaffected by the issue the issue that Cloudy has, the New England style is intrinsically susceptible to Oxidation. We were later told that we should have been advised to Carbonate that particular beer on site rather than Can-condition it as NEIPA’s are notorious for being hard to Can and especially bad when can-conditioned due to the extra airspace that is left inside the can.

The canning company are being very supportive which is greatly appreciated, things like this could easily damage both our business and that of the Canners.

I have some queries to ask the Canners about a couple of aspects of the canning process / procedure that could help avoid overall oxidation and occasional can oxidation.

We also have a couple of recipe and process tweaks in mind that should hopefully make our beer a little more resilient to the rigors of canning and mitigate any extraneous oxygen pickup.

Then it will be Fingers Firmly Crossed for the next time we have the Canning guys on site and Cloudy in tank.

For the very few people that may have got an Oxidised Can you are very welcome to bring your proof of purchase from wherever you bought it and you can have a pint on us at one of our Bar days.