When I started homebrewing making beer was all about experimenting with different combinations of ingredients to see what you got in the finished beer. For me this is still what brewing beer is about, albeit commercial brewing is guided by procedure, quality and record keeping.

Our 5x Beer ‘Core Range’ we started out with lasted about 12 months, the next 12 months moved up a notch and a heck of a lot of new beers were brewed, I believe the next 12 months will be different again though we do have some pretty funky hops to play with during 2018 that is not going to stop us from experimenting with other varieties that don’t always get the same degree of exposure as the Citra/Simcoe/Mosaic/Galaxy/Nelson Sauvin’s of the hop world. 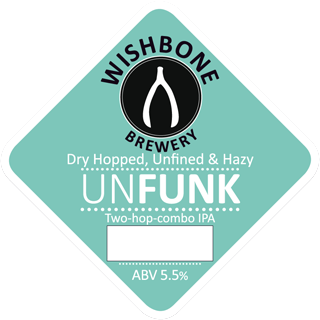 We designed the Unfunk pumpclip (and its Recipe) expressly for this purpose and you will see different combinations over many brews, guaranteed they will all taste like beer and it will show drinkers what these flavour combinations are like, look out for:

We will not be bound by brewing only with the crowd pleasing hops, though if we did I dare say we could make our business climb the ranks a bit faster. Thats not to say that we won’t brew a Citra & Mosaic Unfunk, its about flavour experiences so the more the merrier.

All the above doesn’t do a heck of a lot for your overall Brewery-Score on things like Untappd and RateBeer so although having a high brewery score is obviously very nice we are going to try not worry about that too much and just keep doing what we do.

If you do rate our beers on one of these websites/apps then please leave us constructive comments, and rating a beer 1-Star because its simply not your thing is just dumb and if thats the case please leave a comment with NO rating 😉 Consider all beers separately within style and appreciate that once a beer leaves the brewery we loose control and many variables start to come into play.